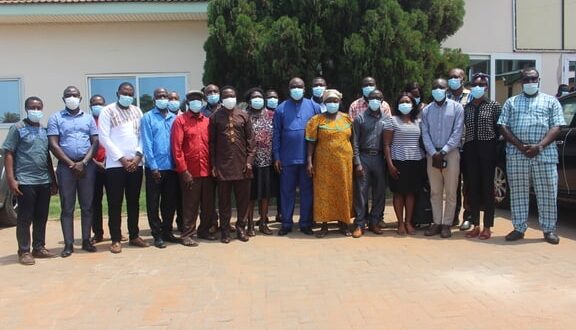 A policy dialogue on promotion of Agroecology concept as a Climate Change mitigation measure in Ghana, has been held in Accra to discuss a more sustainable way of responding to climate change impacts to boost agriculture production.

Stakeholders, including farmers from all over the country and civil society organisations as well as officials of the Directorate of Crop Services, Ministry of Food and Agriculture (MoFA) discussed policy strategies on promoting a more sustainable farming method that is less expensive, provides value for money as well as protect the environment.
The Peasant Farmers Association of Ghana, (PFAG), with funding from Open Society Initiative for West Africa (OSIWA) and Joint Action for Farmers Organisation in West Africa (JAFOWA), collaborated with the MoFA to host the dialogue.
Mr Awal A. Adugwala Wepia, Board Member of Peasant Farmers Association of Ghana, (PFAG), said based on the enormous challenges being faced by farmers, it had become necessary to push the agenda for the adoption of agroecology, which provided enormous benefits for the nation in boosting food and nutrition security.
“At this stage it is safe to say that the agricultural sector is indeed at its trying moments and we expect government to face the storm, take bold decisions and make appropriate investments to avert the gloom we are experiencing.”
Mr Wepia said the dialogue, therefore, provided the opportunity to highlight some of the current happenings in the agricultural sector that needed government attention.
According to Mr Wepia, there were some challenges associated with the government’s planting for food and jobs programme, which was making farmers struggle to get fertilizers, adding that the situation coupled with unstable rainfall pattern being experienced in most parts of the country had serious implication on food security and needed serious attention.

“The difficulty of poultry farmers in getting feed is also a major concern that should not be underrated, while the emergence of the Bird Flu in some regions is also a source of worry.”
He said the current challenges faced by farmers in accessing chemical fertilizer provided a ripe opportunity to relook at Ghana’s agricultural systems and also justify calls for promotion of more sustainable forms of agriculture.
To reduce the over reliance on imported chemical fertilizers, which accounts for more than 80 per cent of the Fertilizer Subsidy programme, Mr Wepia urged the Government to provide adequate subsidy for organic fertilizers and also promote agro ecological practices.
This will reduce farmers dependency on chemical fertilizer, especially in needful times like this, he said.
He said the Government should also finance MoFA to establish Agro ecology Demonstration farms at various District to train farmers on agroecology and sustainable farming
To avert issues of deforestation especially by charcoal producers and other users, which contributes significantly to climate change, specific high yielding trees with a short maturity period should be introduced to the charcoal burners to plant and harvest for the charcoal.

Government should not relent in the fight against illegal mining popularly called “galamsey” and also use the IDIF programmme to partner with the private sector to establish more organic fertilizer companies in Ghana so as to reduce the over dependence on imported chemical fertilizers.
Mr Wepia expressed the hope that the upcoming mid-year budget to be presented by the Ministry of Finance would contain some of the solutions to the challenges.
Mr Seth Osei Akoto, Director of Crop Services Department, MoFA, said climate change was a developmental challenge of the 21st century and needed to be mitigated by concerted efforts, especially, its impact on agriculture and food systems in Ghana.
He said Government, has thus partnered other key stakeholders through MoFA to put in a lot of efforts to address the issue including the development of National Climate Agriculture and Food Security Action Plan to operationalize the implementation of the agriculture and food security section of the National Climate Change Policy
There was also the Planting for Food and Jobs, one Village One dam, and the Ghana Agriculture Sector Investment Programme (GASIP), that also have a component of climate change and adaptation measures being implemented in communities, among other measures that had been rolled out to mitigate climate change impact.
Okuani Kofi Boa, a farmer and the Executive Director of the Centre for No-Till Agriculture, emphasized the need for Ghana to take agroecology very seriously to help farmers overcome the challenges of changing weather patterns and other clime change induced challenges.
GNA