As Ghana and other nations gear up for the 27th session of the United Nations Conference of Parties (COP 27), scheduled in Egypt from November. 6-18th 2022, the Peasant Farmers Association of Ghana, together with partners, as part of the National Caravan activities, with support from OXFAM, embarked on exercises to raise awareness of climate change and draw government and other actors’ attention to the effects of climate change on food security and the overall economic stability of Ghana.

The PFAG together with Civil Society partners AbibiNsroma Foundation, Sustainable Development in Ghana (JVE), TAMA Foundation and the Centre for Indigenous Knowledge and Organizational Development (CIKOD) undertook an awareness drive to educate citizens on climate change, its effect on livelihoods and demands from government and stakeholders ahead of the Climate change conference. The team were stationed at vantage traffic intersections in Accra, thus Opeibia, 37 and Okponglo distributed climate change messages to motorists. 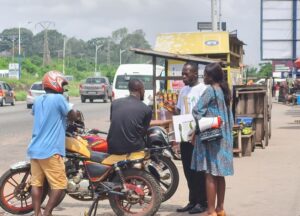 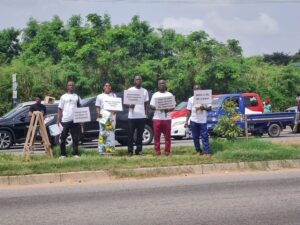 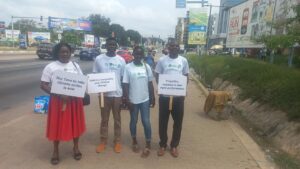 The team then addressed the press on its demand for climate justice and investment ahead of the gathering of world leaders. The Executive Director of PFAG in his statement demanded that government should as a matter of urgency, implement the Land Use and Spatial Planning Act, 2016 to regulate the use of lands for agriculture, and domestic and industrial activities. In addition, there should be an immediate commitment to ban the activities of all illegal mining in the country. Also, the government should commit budget allocation for rigorous mitigation and adaptation measures to be adopted to avert further effects of climate change on smallholder farmers, especially women and young people in the country. Lastly, there should be an increased investment for sensitization of farmers and other stakeholders on the impact of climate change on the environment, water bodies and food security.

On his part, the Executive Director of AbibiNsromah Foundation, Mr. Kenneth Amoateng stated that the primary focus of COP 27 was to address loss and damages and called for developed countries to pay for the damages they have caused to the environment. Mr. Wisdom Koffia of Sustainable Development Ghana (JVE) also called for the prioritization of agroecological practices to build the resilience of farmers to the effects of climate change. 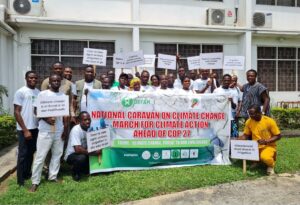